Hello friends :)  After many long nights sorting through photos, editing video from my very first interview (was pretty nervous!) and taking my time to write a special post, it is with great pride that I am able to offer to you my recent article published on the Huffington Post covering our adventures through Montana.  Specifically we were on a mission to pay a tribute to the film, “A River Runs Through It,” as 2013 is the film’s 20th year anniversary.

So without further ado, I proudly present (click the image to read): 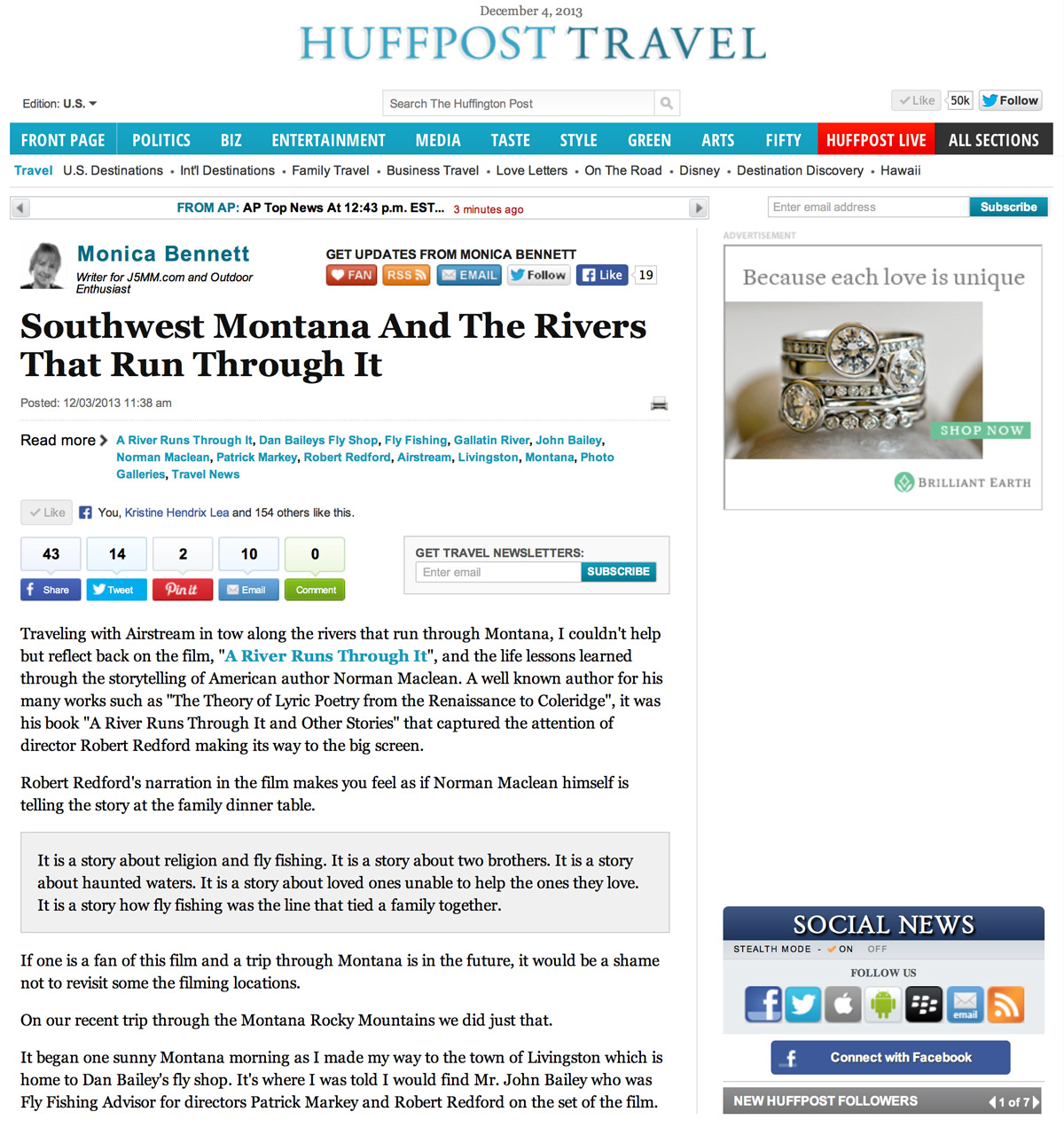 For a little “behind the scenes,” as to how this piece came to be I can share with you one thing, it was not easy.  That is for sure.  Since it’s been 20 years from the movie’s debut, not many people can remember where parts of the movie were filmed.  I was told that some of the people from Livingston who were involved in the movie have either moved, or sadly passed on.  But thankfully with the help of Lu Anne from the Livingston Chamber of Commerce and Sandy Wulf, Public Works Director in Livingston it worked out much better than we had imagined.  Thank you Lu Anne and Sandy !!

So this is how it all began.  We took a pleasant drive leaving Yellowstone Park with a destination to the Yellowstone Edge RV Park which would be perfect for us as it’s rather close to Livingston.

We highly recommend staying here at Yellowstone’s Edge RV Park for many more reasons that one – but mainly you are glamped along the Yellowstone River, have full hookups and WIFI :)  There is a cute little general store packed with goodies from souvenirs to sweet treats and everything in between from sundries and travel books — even RV supplies if you need them.  The staff is kind and everyone here was very welcoming.  Many of the campers here come back year after year just because they enjoy it very much.  After our visit, I wasn’t surprised.  It was a beautiful RV park. 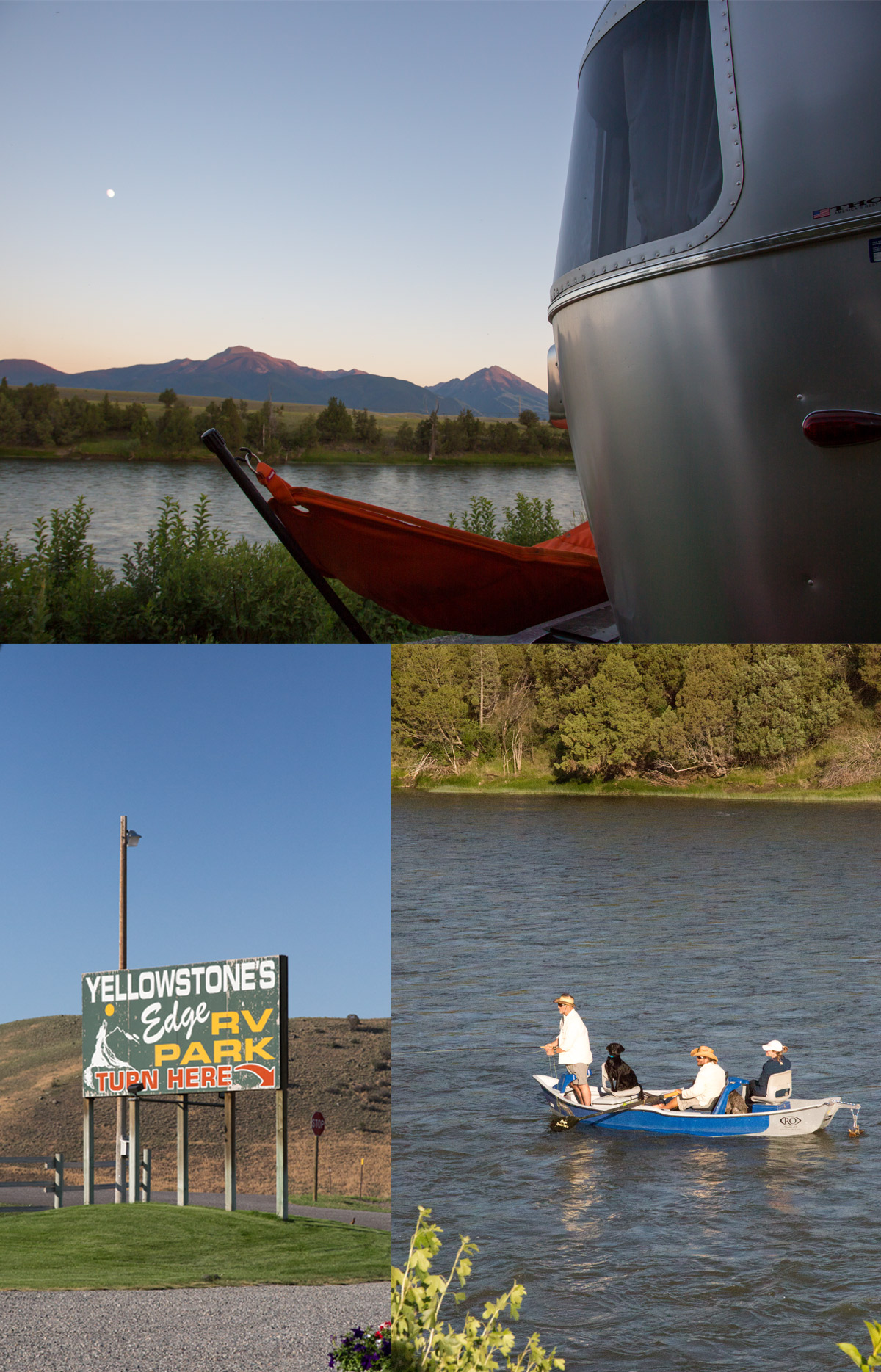 We dedicated our first day to meeting Mr. John Bailey who was Robert Redford’s fly fishing advisor on the set of the film and then later touring the town of Livingston.  Prior to our trip I had purchased a rather nice microphone so I could do my very first interview with Mr. Bailey.  On the morning of our big tour I went to get my microphone and could not find the instructions!  I literally tore the Airstream apart and still nothing.  So I kindly asked B, “Honey would you like to be mommy’s very first interview?” and how lucky I was to hear, “Aww cool mommy!”

So off onto the front lawn we went and interviewed my boy!  I figured out how to use the microphone after a few attempts I felt confident enough to head into town and meet Mr. Bailey.

I want to give a big thank you to Mr. John Bailey.  He was SO incredibly patient with me as I nervously fumbled with my camera somehow instantly forgetting how  to hook up my microphone.  I was pretty sure my face was the color of a tomato, no doubt.

“And you don’t know how to use it.”  That was a statement, not a question.  Omg.

The room was filled with complete SILENCE.

And then we all laughed and the ice broke.

And then miraculously my memory returned and I was able to begin my interview, with my new microphone.  :)

Mr. Bailey also allowed me to take photographs of the pictures that Columbia Pictures gave to him after the filming of the movie.  You can see Mr. Bailey advising Craig Sheffer on his fly fishing as well as standing shoulder to shoulder with Director Robert Redford.  It was pretty cool to see these pictures.

And this one is my favorite.  It is Mr. Bailey with John Dietsch.  Robert Redford fondly referred to John as the Department Head of Fly Fishing.  In addition to teaching Brad Pitt how to fly fish, John was Brad Pitt’s (Paul) stunt double in the infamous scene towards the end of the movie where he is hanging on tight to his fly rod while riding the rapids determined to get his fish.  I had the honor to speak with John who is now a director and producer for Castle Creek Productions in LA and I almost had him convinced into coming along with us on our trip.  I even offered up our Airstream for accommodations, lol!  He loved the idea.  Unfortunately, as my luck would have it he had to meet with clients in China for a future filming/tv production.  He and I remained in touch while we were on our trip and I recently discovered we both shared a commonality in losing our brother(s).  He sent me the nicest email that sent me into tears of happiness in regards to those sad losses in our lives.  He really is such a special person to me.  Thank you John for taking your time to speak with me and help me along in this adventure xoxo 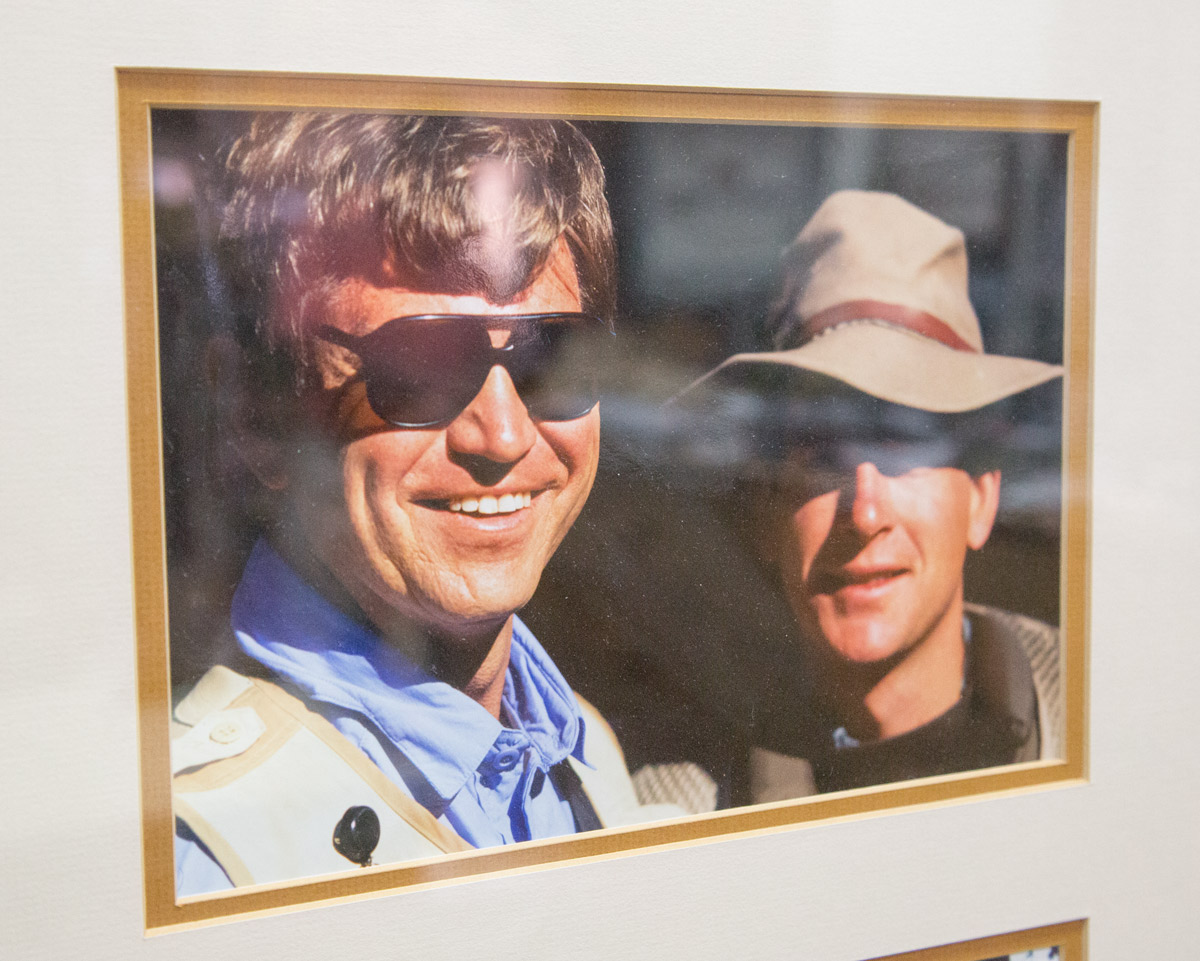 After meeting Mr. Bailey we set out in the town of Livingston and had our lovely tour with Sandy Wulf who was familiar with the filming locations in town.  That went off without a hitch.  It was really a lot of fun touring the town and being able to enter the church.  Down in the basement where we entered there was a poster displayed on the wall from the movie.  I smiled.

Sandy’s daughter Brianna soon joined us.  She was an extra in the film and sat directly behind young Paul and Norman in the church scene.  If you watch the movie, keep your eye out for her as she is the darling little girl behind the boys wearing a hat.  She sat in the same spot where she sat 20 years ago in the film and I felt so fortunate to be able to take her picture. 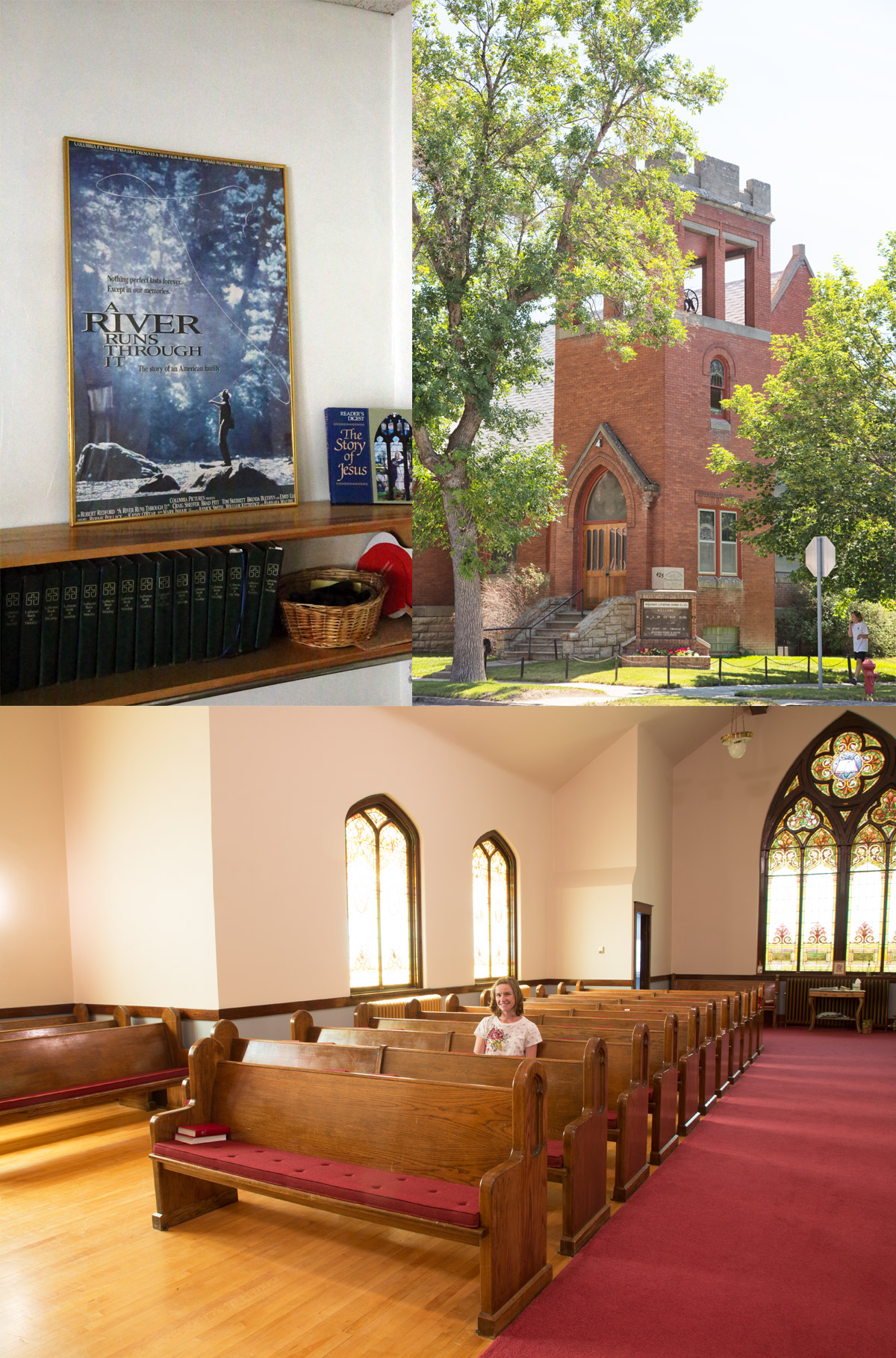 Then finally we headed in search of the Maclean family home as depicted in the movie.  It wasn’t easy to find since we had so many misleading directions from many people so we just took our chances going on some leads and voila — driving up a dusty gravely road I spotted the house!  I also spied a woman sitting on her front porch sipping some iced tea.

“Perfect! There is someone home :) !!”  I happily told hubby.  He knew very well that if no one was home, we wouldn’t be taking pictures.

As I hollered a “Hello!” to her she gestured me to come up the walkway and I did.  I introduced myself to her and told her why we were there.  She introduced herself as Regan and has lived in this house all her life with her siblings.  She now owns this house and proudly so as it’s a family heirloom no doubt.   I asked if she could share any details about the house during the filming and even though she was away attending college when filming was taking place, she did share with me some interesting facts.  The interior was never used in the film.  Only the exterior. The filming crew built some make shift houses on the piece of land next door and the church across the street was also included in the movie in one of the night scenes.  She also gave me free reign to walk her property and take as many pictures as I wanted.  I was in photography heaven!

She was one of the sweetest people I have ever met.  It seems to be a commonality here in Montana with everyone being kind and helpful.  Thank you Regan !!

Since we had our Airstream with us, there was no need to return to Livingston but rather continue on down into the Gallatin Valley which was home to the Gallatin River.  Mr. Bailey gave us clear instructions on the route and we found the area no problem.  He even highlighted on a map specifically where the filming took place and as we drove along we decided to stop at an RV Park called the “Inn on the Gallatin.”  Little did we know we hit the jackpot.  THIS was the main filming site for the river fly fishing scenes in the movie.  Located right on the Gallatin River, this sweet little RV park gave us front row accommodations to the fly fishing heart of the movie.  Some locals even told me that the crew would practice their casting on the front lawn because they had room to practice.  The Gallatin River down below didn’t have many open spots where one could cast freely so once they got down there to film, they’d had better been warmed up.

After we unhitched the Airstream we took a walk down to the river and I immediately recognized the spot where Brad Pitt and Craig Sheffer stood fishing.  It was really an amazing feeling.  Not because I was standing in the same spot they were, but to be there and to feel as if I was in the movie myself surrounded by the incredible beauty around me.  The high cliffs, pine trees, wild life, swiftly flowing river, perfectly polished river rocks beneath my feet and crystal clear water.  I could have cried.  It was so beautiful there.  I then thought to myself, “How will I ever be able to leave?”  It was life changing – beautiful. 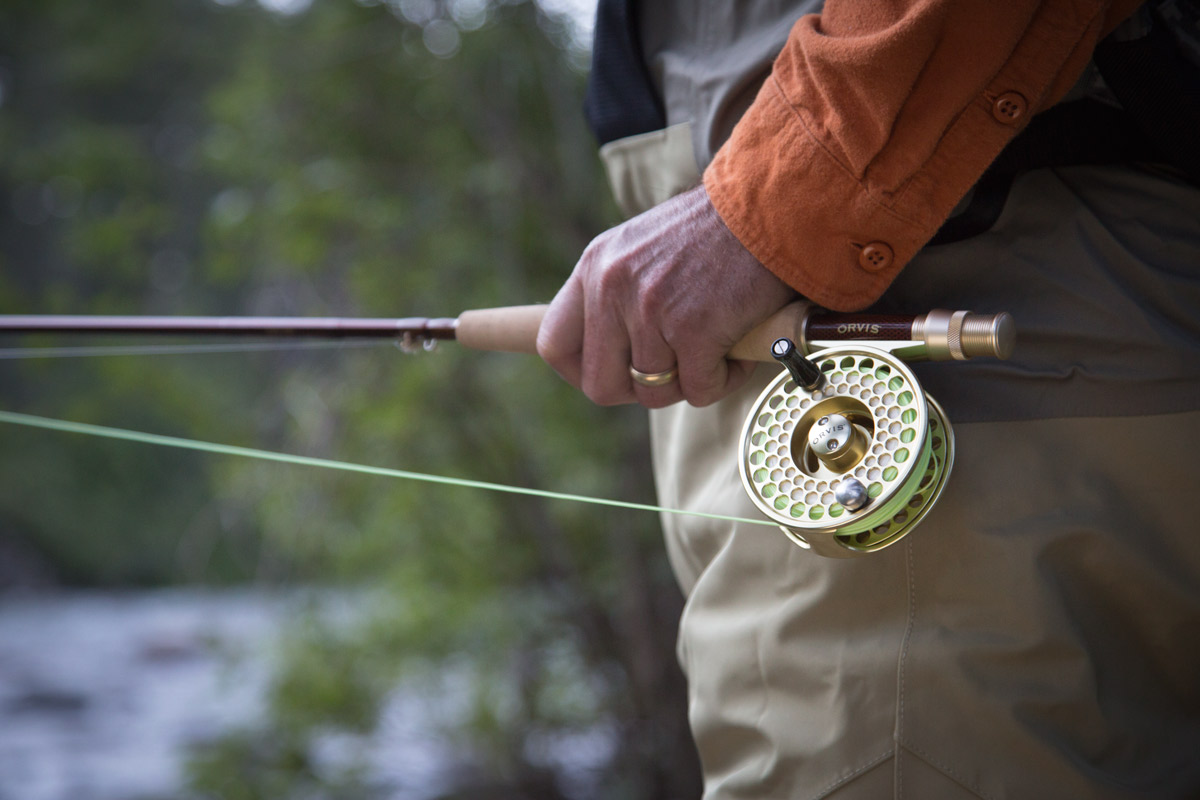 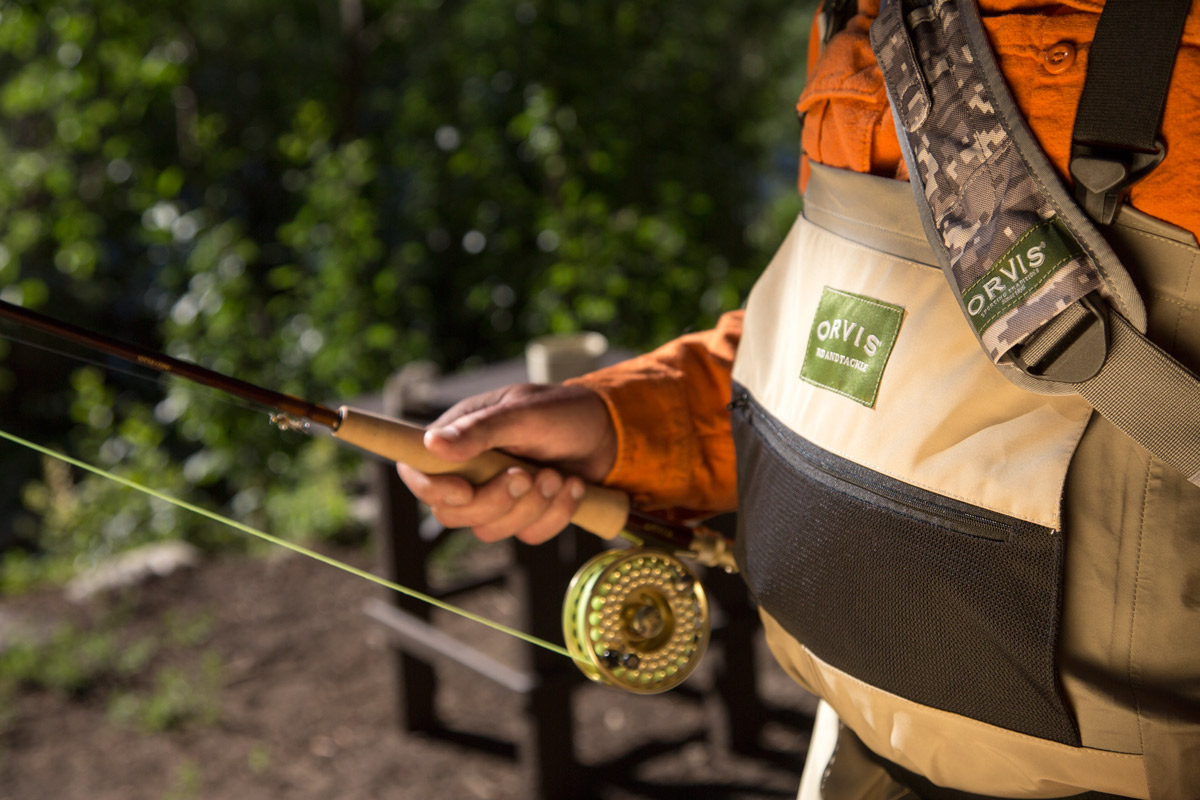 We spent a few days fishing to our hearts content.

And then it was time to leave and head back to Seattle.

Montana, you have changed me in ways you will never know.  Thank you for sharing your beauty with us.  We are truly forever grateful to you.

And for you my friend reading this, I hope you have enjoyed my journey rediscovering the filming locations of the movie A River Runs Through It.

Thank you for following me ♥