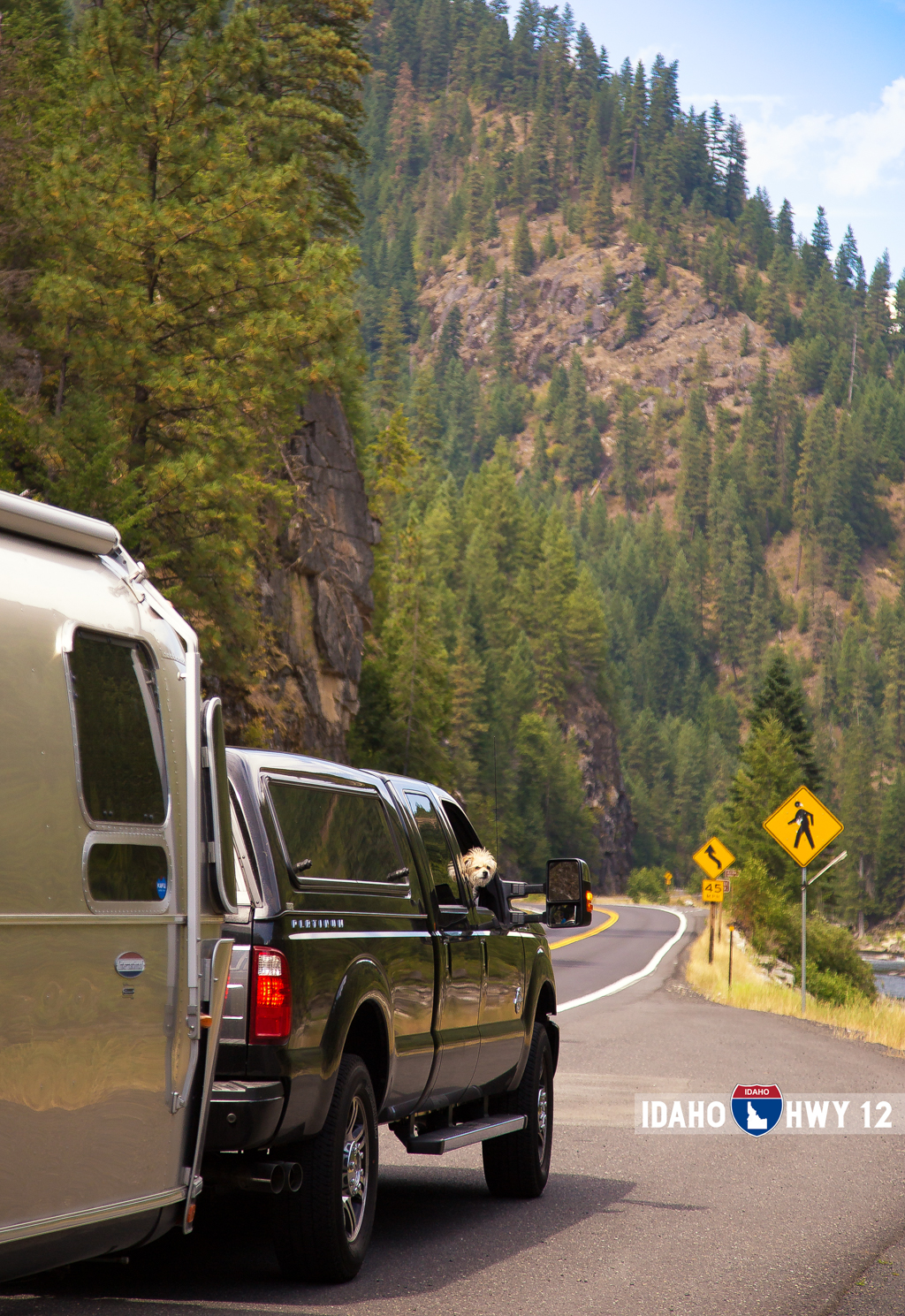 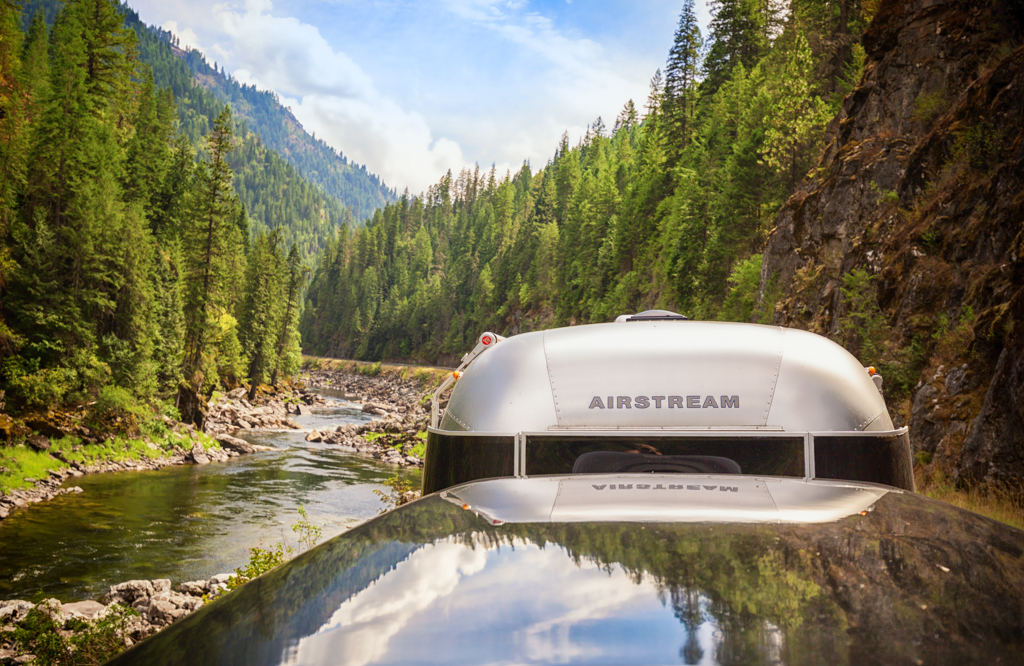 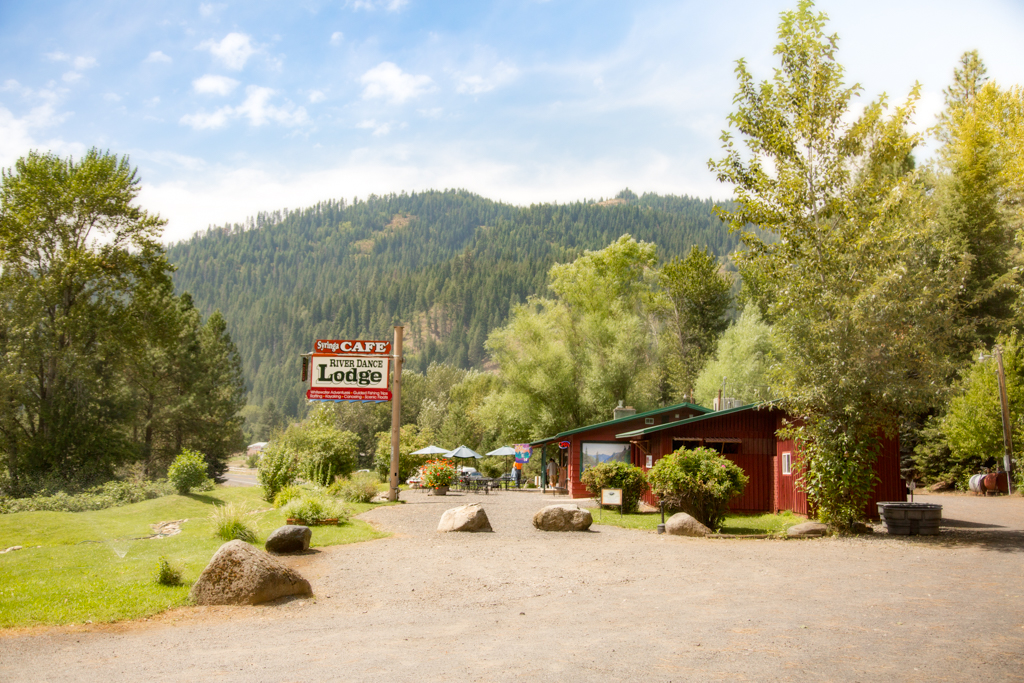 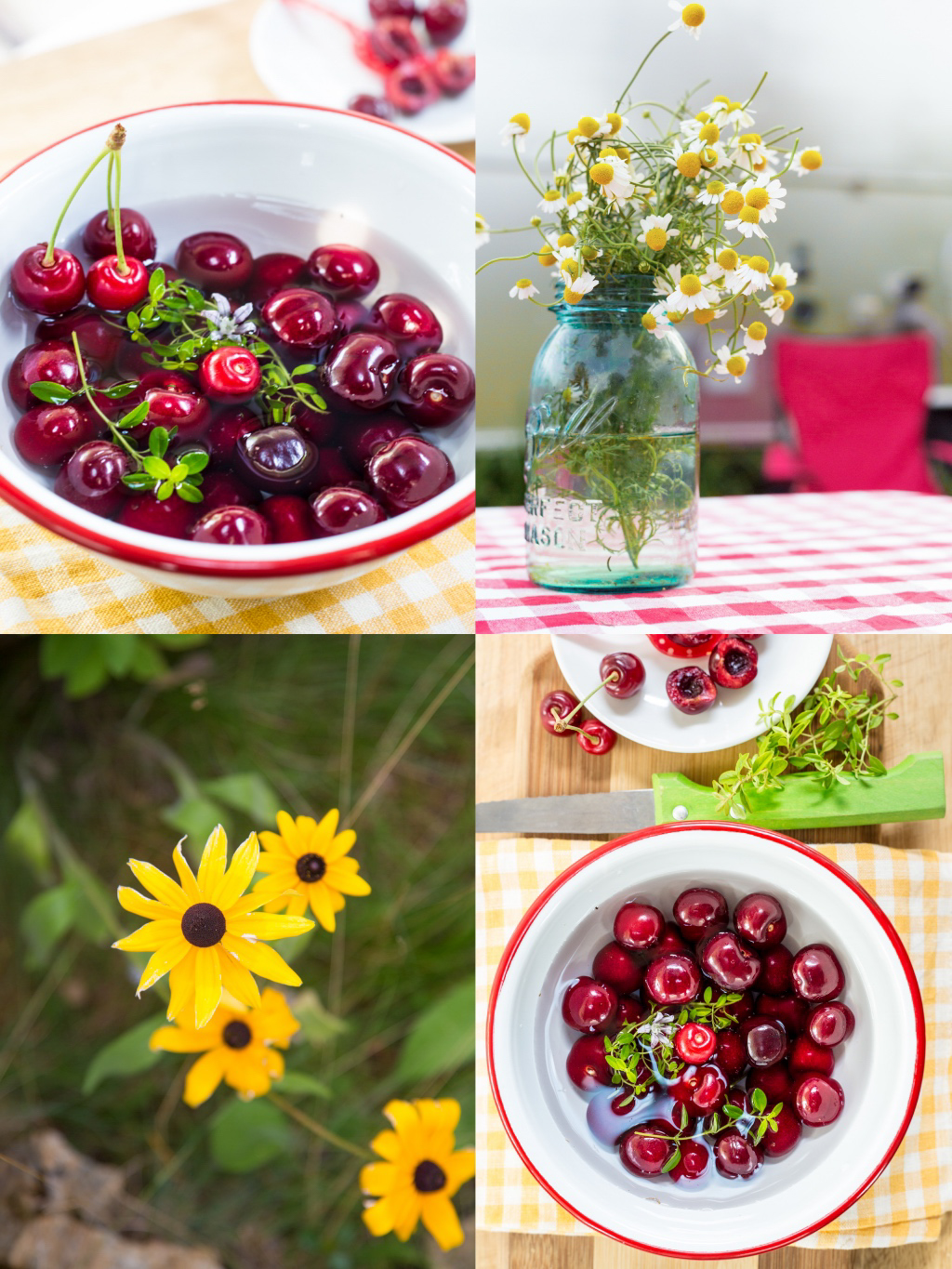 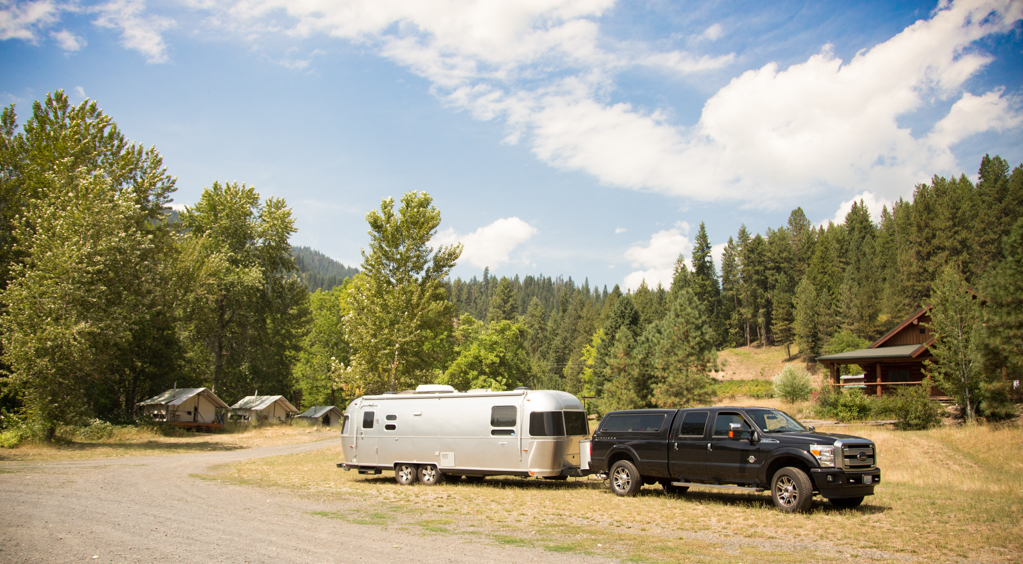 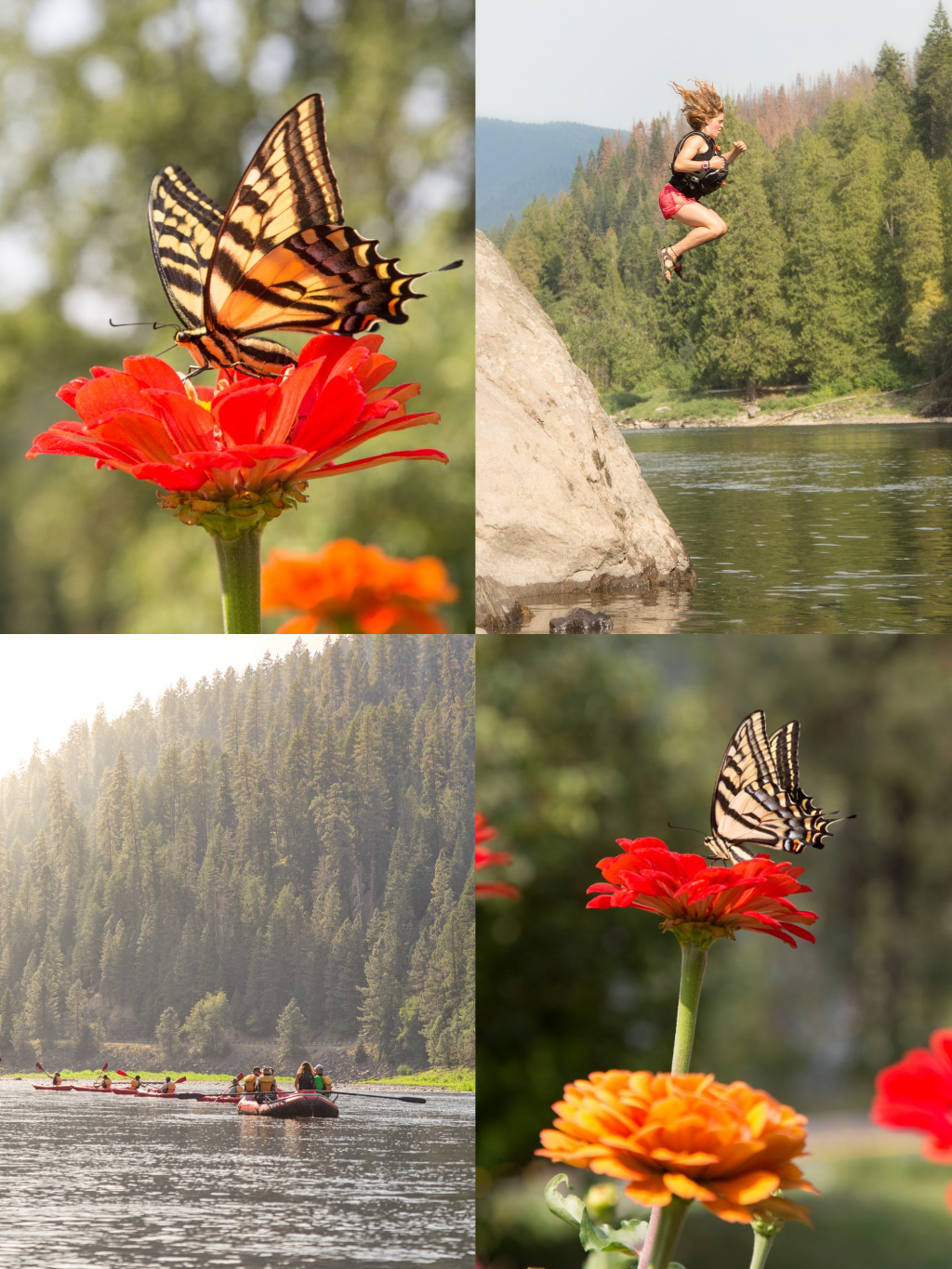 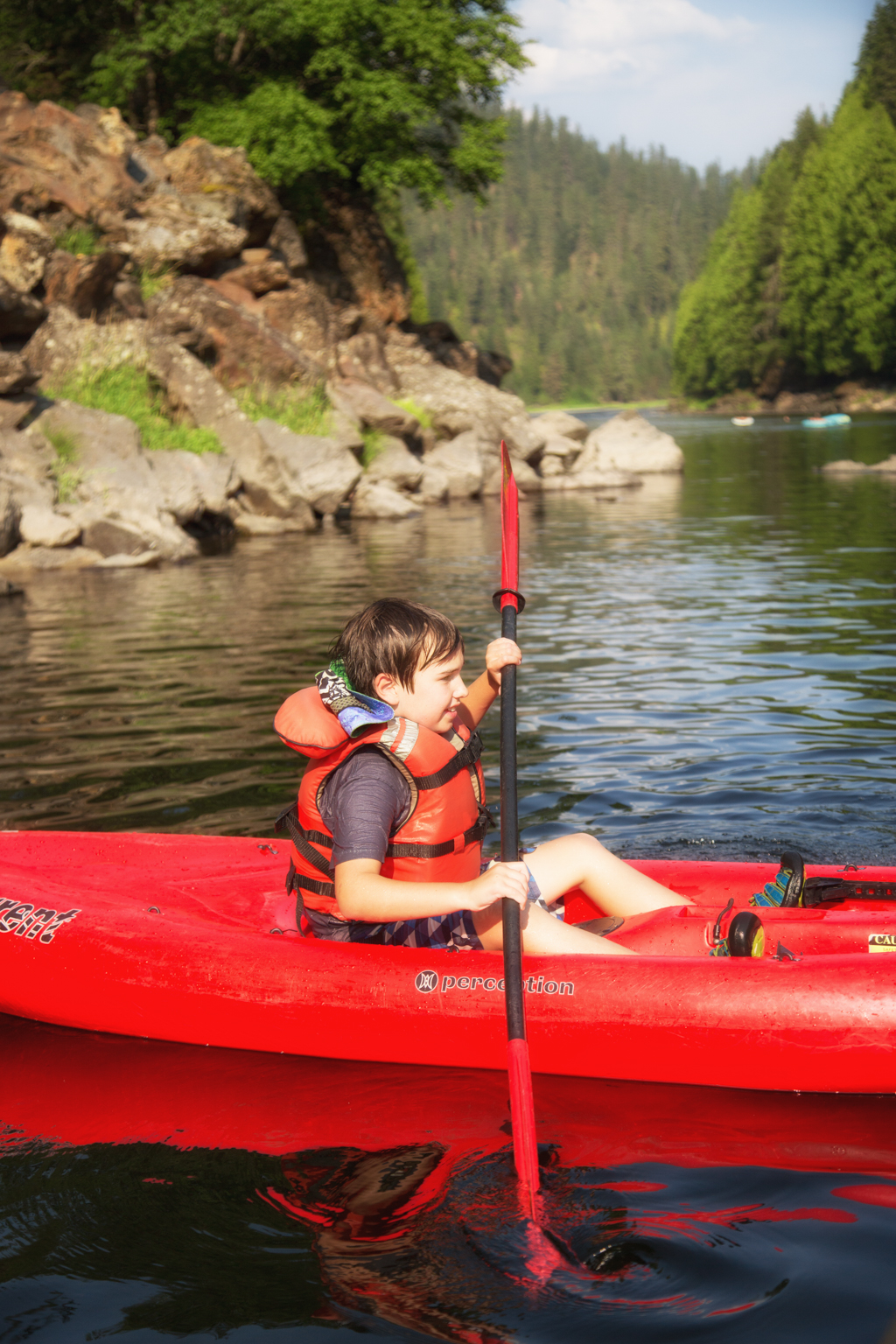 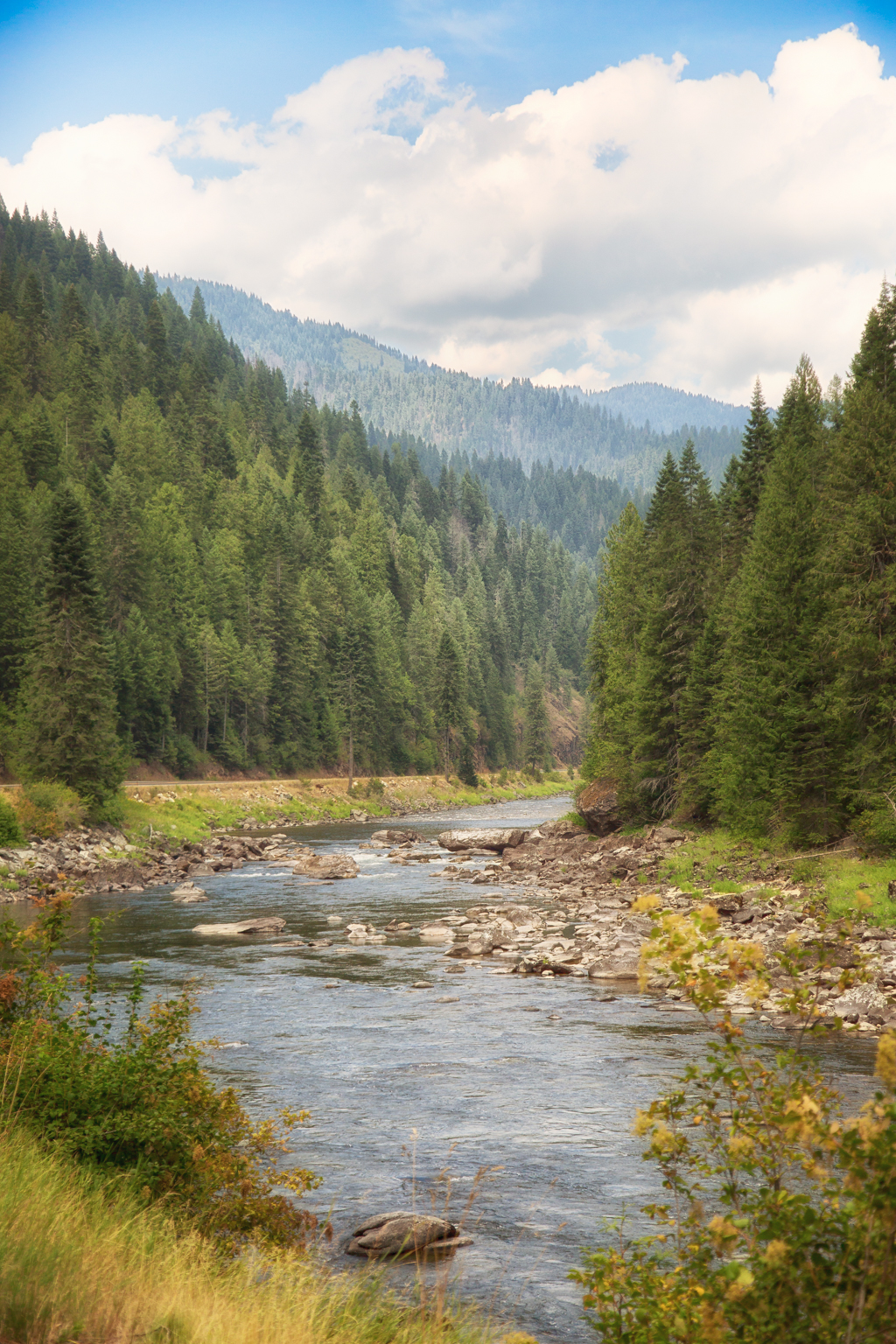 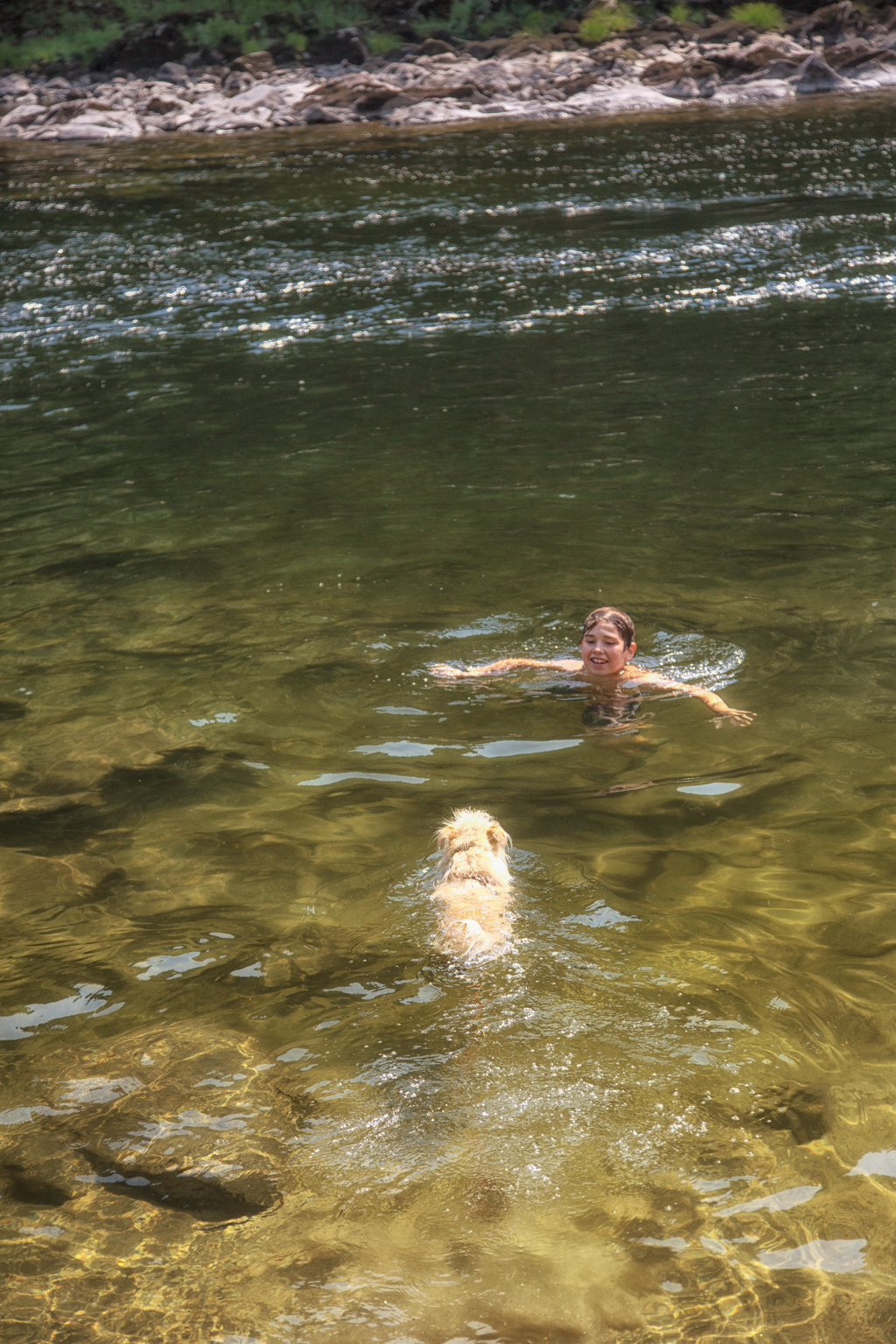 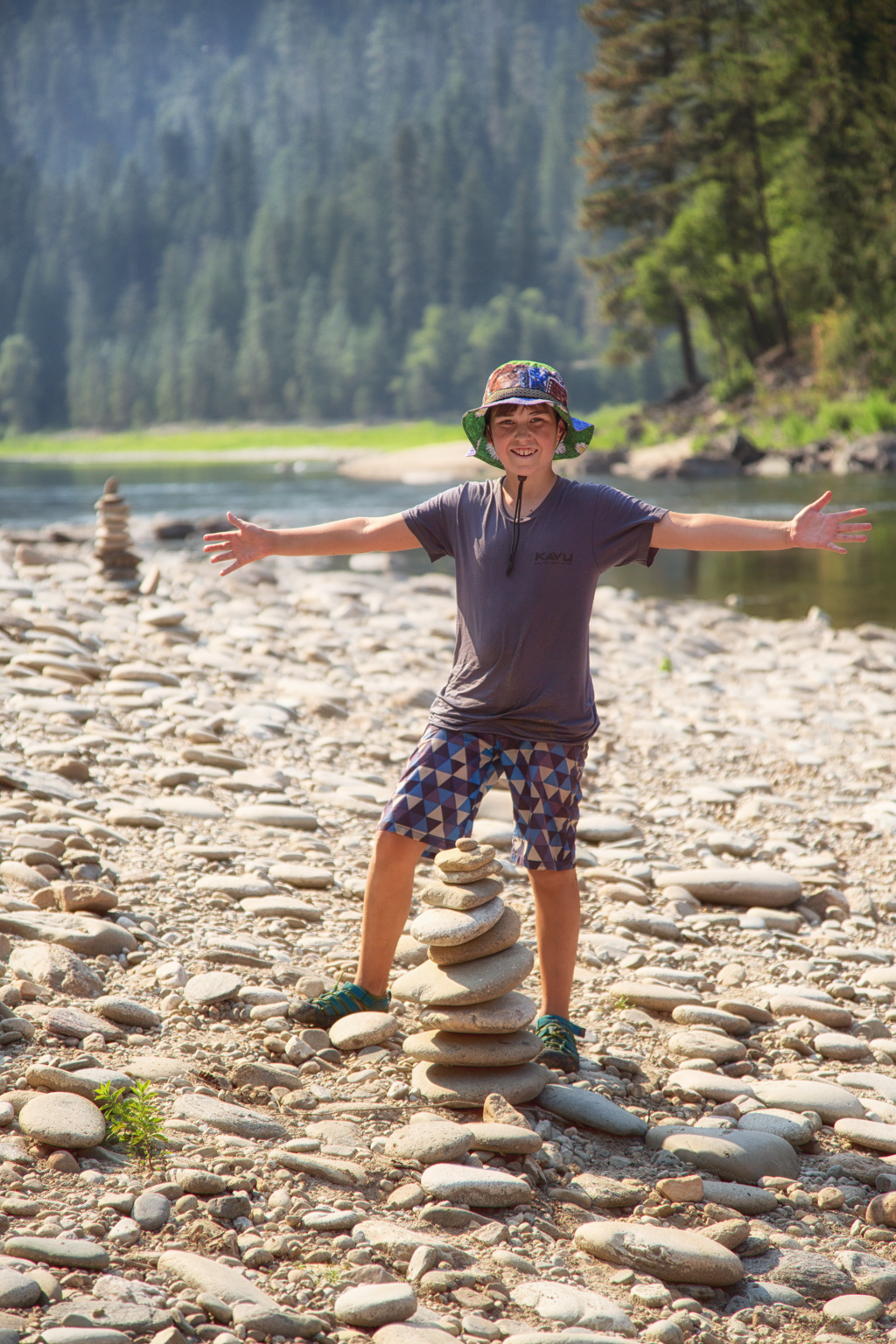 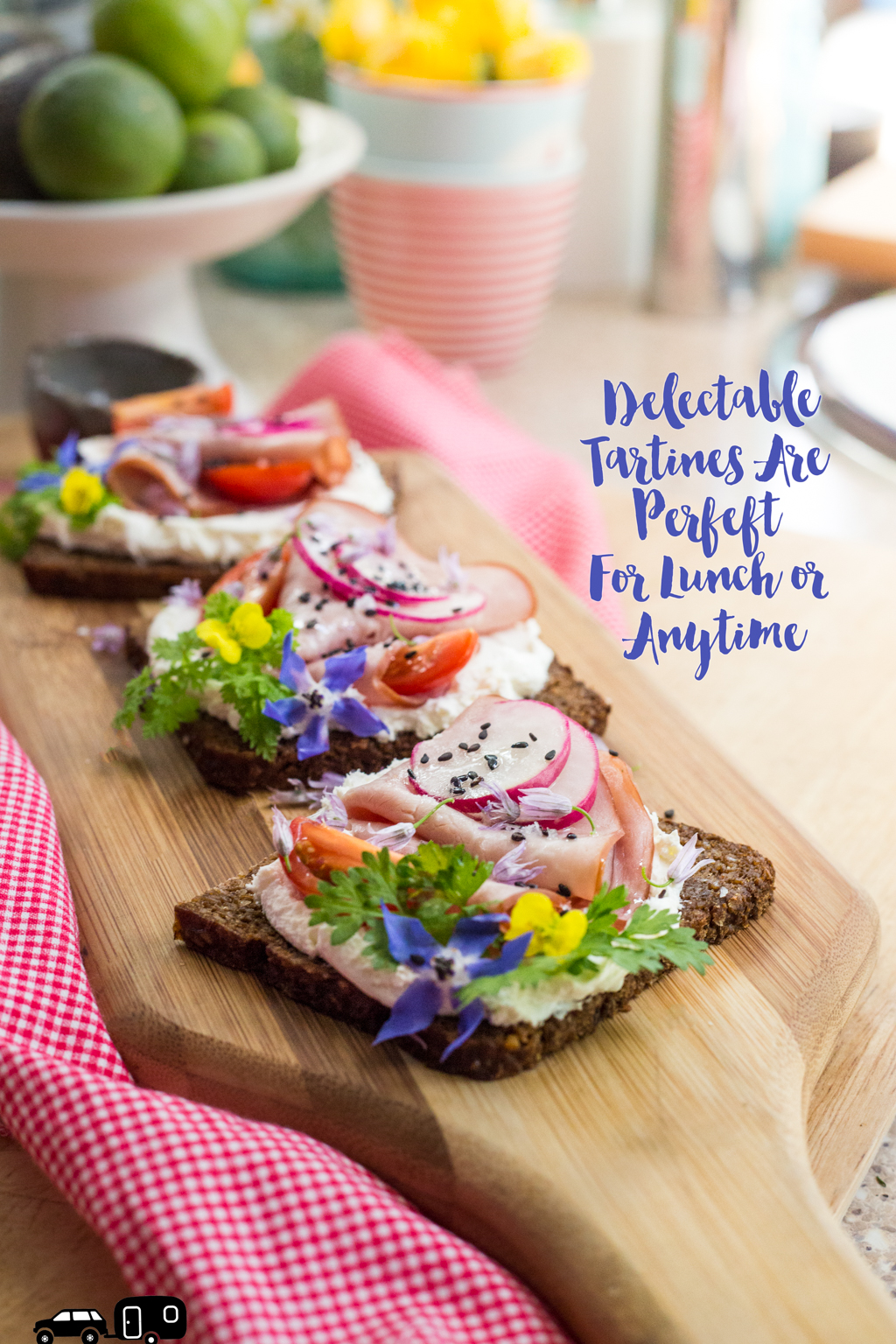 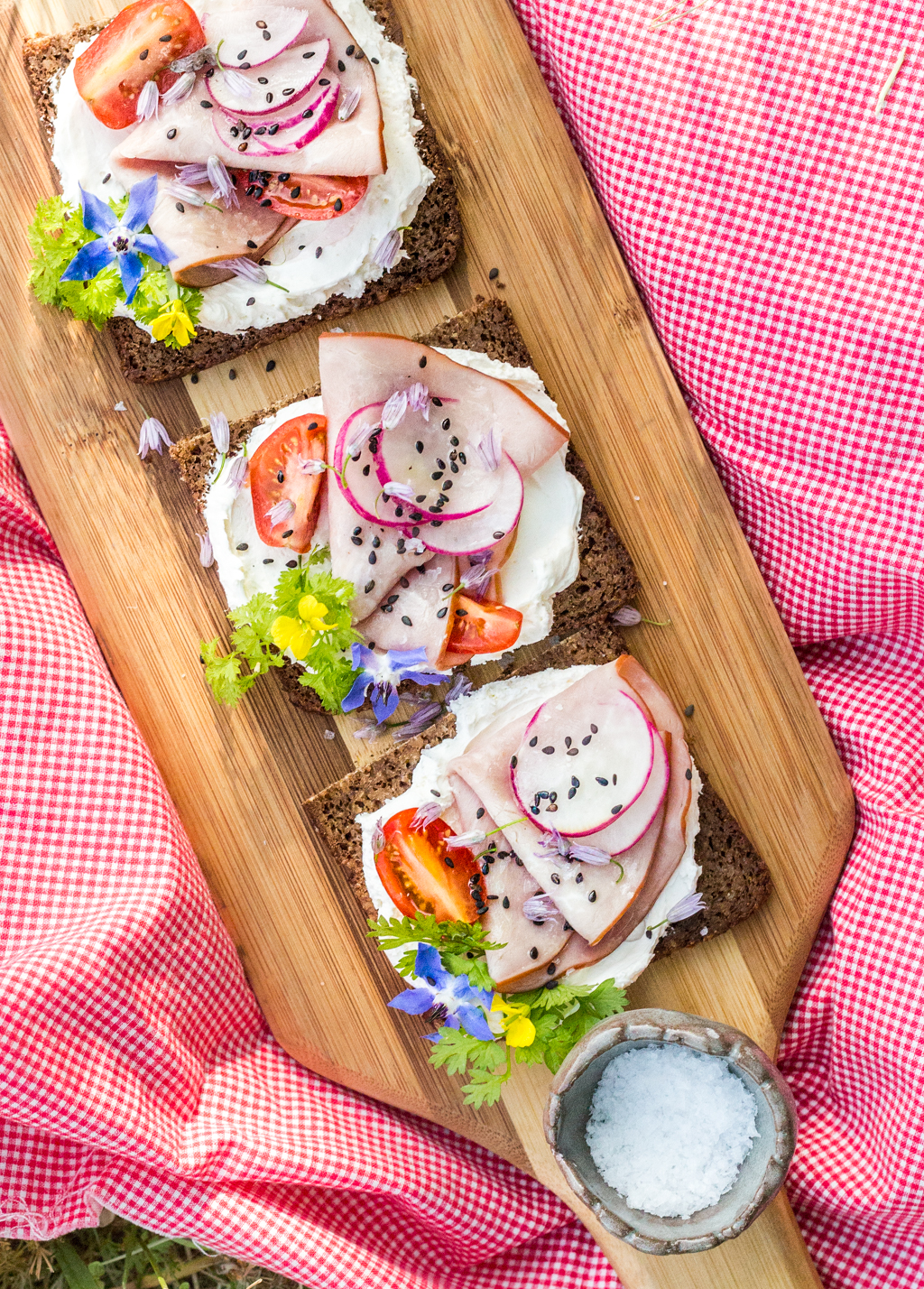 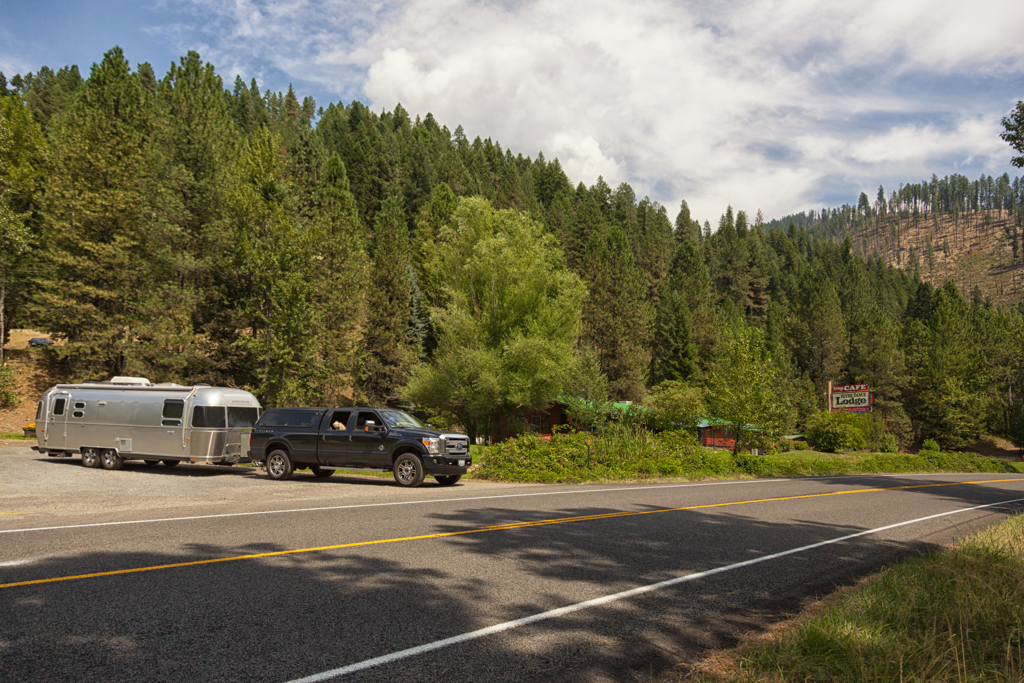 Last August we took a splendid road trip that lead us through Washington, Idaho and finally Montana.  Towing the Airstream through the contrasting landscapes was like a massive lesson in geology.  Hwy 12 is just one of many of Idaho’s “Scenic Byways,” and I here to tell you first and foremost that this particular stretch of highway took my breath away.  I highly encourage you to come and visit and if you follow my future posts covering this trip of ours, you will see why.

We began the first leg of our trip in Syringa, Idaho which is home to the River Dance Lodge, owned by ROW Adventures.  ROW invited us to come out and experience some outdoor adventures the Lodge offers up such as fly fishing, white water rafting, guided hikes and more.  We had plans to camp on-site as they have two dry camping spots, but since the outdoor temperature was a ridiculous 107 degrees, we opted to camp down the road at the River Junction RV Park that offered up full hookups and with full hookups, we would have A/C (our generator can’t handle running the A/C sadly).

Plans with ROW were a day of guided fly fishing and another day of white water rafting, neither of which did pan out because the rivers were too low for either adventure.  But we did experience a fun tubing and float trip.  It was my first time ever tubing down a cool rushing river and I can tell you, it was the bee’s knees especially considering how scorching hot it was outside.  It was also B’s first time commandeering his very own kayak and the boy had a ridiculously fun time.  So all’s well that ends well.  Thank you ROW Adventures for inviting us out :)

Since it was SO. HOT. I did not cook, at all.  We literally survived on cherries that we picked up from a fellow selling them roadside and goodness, they were the sweetest cherries we’ve ever had.  We also enjoyed tartines, which is just a fancy way of saying, “open faced sandwiches,” :)  Super easy way to eat when you absolutely can not bear to even think about turning on the stove — I still can’t get over how hot it was that summer!  I also realized last summer why the new Airstreams now come with two A/C units.  It took FOREVER to cool down our Airstream in that heat and even then, when it was 107 degrees outside, we could only get down to around 80 degrees inside.

I also feel terrible that it has taken me so long to finally begin writing about this trip!  So much has been happening in our lives.  Hubby has had two operations on his hip this past year.  You see, I have never mentioned this before, at least I don’t think . . . but he suffers from Parkinson’s Disease and because of his disease, he is prone to falling and when you have a hip replacement, the first thing the doctor tells you is, DO NOT FALL WHATEVER YOU DO.  It does not matter how careful a person is — if they are prone to falling, they WILL fall, eventually.  And he did.  And it was the scariest day of my life because I was upstairs and he was downstairs and I heard him fall and I heard him cry out and I tried to run to him so fast, but I couldn’t (B was at his baseball game, thankfully!).  I felt like I was wearing a pair of cement galoshes — I absolutely could not move quick enough to get to him.  When I finally did get to him, he was on the floor in his office, writhing in pain and I was standing over him DO YOU WANT ME TO CALL 911?! — he thought for a moment (and I knew he was thinking about the health insurance’s required co-pay of $500 for ambulance/ER services, because he likes to pinch his pennies) and finally he said YES.  and then I couldn’t remember how to dial 911!  Imagine, I just sat there starring at my phone in shock.  But I eventually did remember and the ambulance did come, and another ambulance came and even a fire truck!  But here we are NOW 12 months later and he is healed up, thank goodness.  In other news, he had an appointment with a neurosurgeon to see if he would be an ideal candidate for deep brain stimulation surgery and he IS.  He absolutely IS!  I was under the impression this surgery only treats people who have uncontrollable shaking (which he does not) but that is just not the case.  It also helps eliminate other symptoms of PD.  In hubby’s case, the man is just SLOW AS MOLASSES.  Forgive me if that sounds a little harsh, but it’s true.  That is his only symptom.  He is slow and gets “stuck.”  Turns out, this surgery will be 100% effective in treating him.  So we are incredibly happy!  B told me the other day, “Mommy, I can’t imagine how daddy is going to be.” (because B was only three years old when hubby was diagnosed, he is now 12), I told him, “Honey, he will be the same daddy, only speedier.” :)

Speaking of B, the boy has straight A’s in school and we are so proud of him.  I still can’t believe that sixth grade will be over for him.  It seems the older I get, the faster time goes.  It’s a little scary!

Oh and at home we are finally finished with the upstairs flooring project.  We went from 16 year old carpet to hickory hardwood floors and I am very pleased with the outcome.  We had to haul 16 years worth of “stuff” from the upstairs to the downstairs and believe me when I tell you, that was quite the job!  I thought twice about hauling all that stuff back upstairs so we ended up giving most of it away to our local Buy Nothing Project.  Have you heard of that?  It’s a generous online community where members get together on Facebook and “gift” items they no longer need!  I learned about this after bumping into my neighbor while we were both walking our pooches and she enlightened me.  I could hardly wait to get home and sign up.

For example, do you see my grand baby’s new red “rock and sleep” in my office below?  I was gifted that from a sweet mom in my neighborhood who no longer needed it!  I literally picked it up this morning.

Now the only thing missing in this picture is a baby!  Lucky me — I am going to see her and my daughter tomorrow. 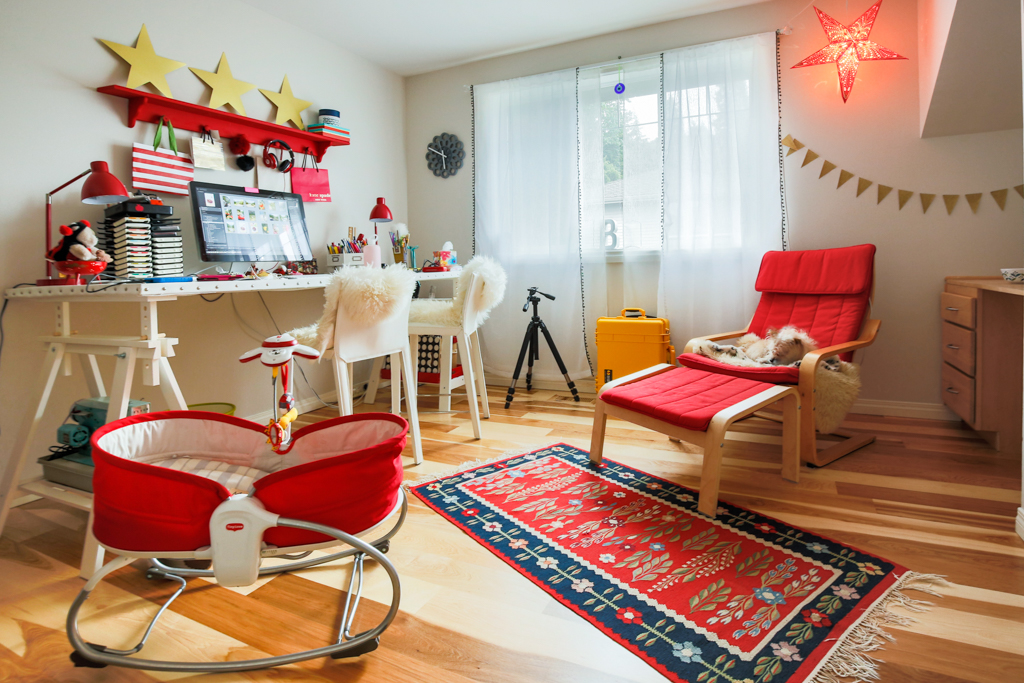 One of my favorite pics of hubby (and Oliver) ❤ 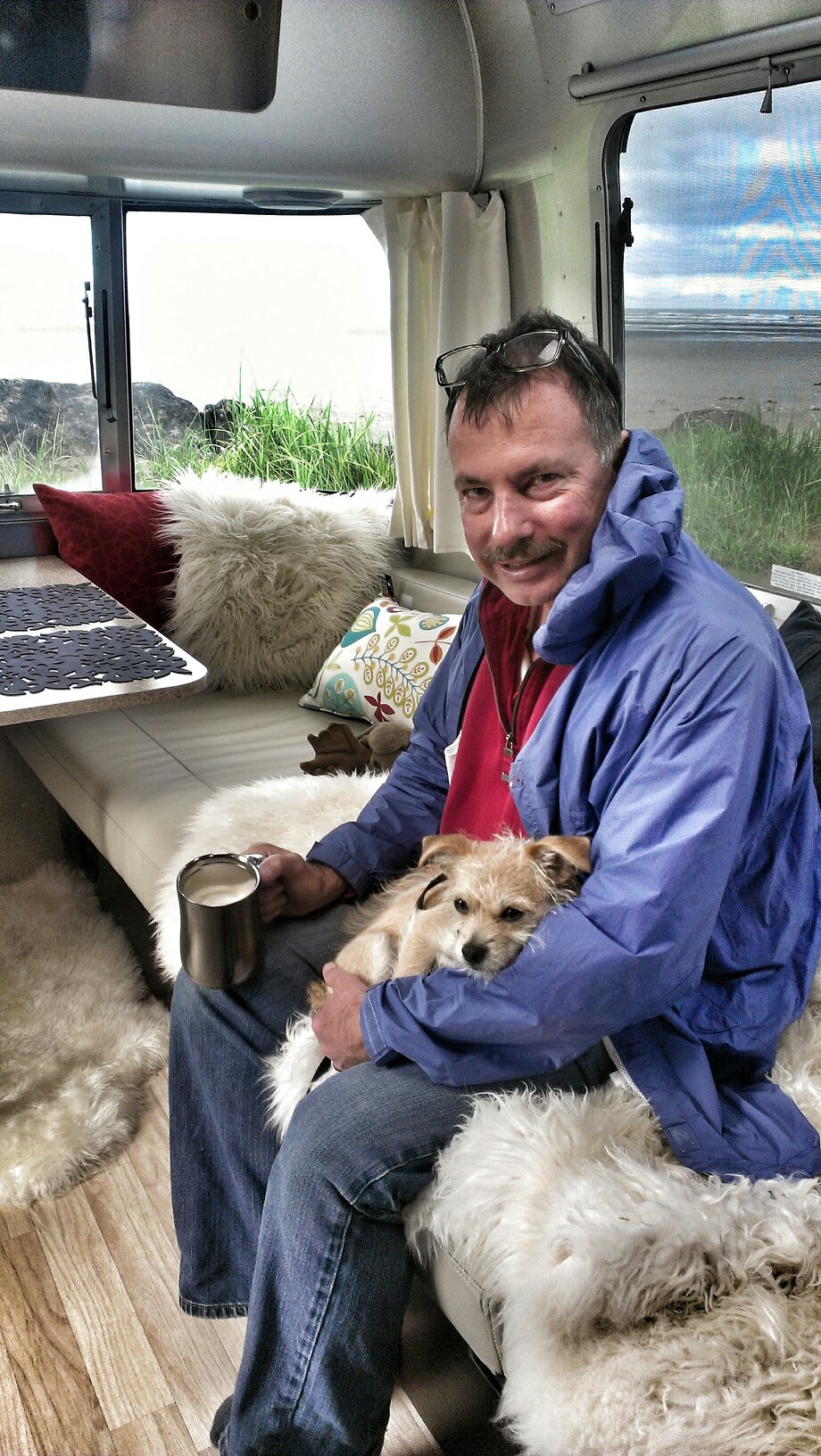 Hubby and I have always taken care to make sure that we make each summer count for B.  Next week, for two weeks, we’re off to Idaho’s cool and refreshing flowing rivers, glorious lakes, majestic mountains and continual non-stop outdoor exhilarating adventures.  We are celebrating the precious #18Summers we have with B (seven left to go before college *snif*) with Visit Idaho and Row Adventures.  There’s a lot on the agenda that I am seriously looking forward to photographing and sharing with YOU.  I understand cell service is zero to nill where we will be, but you never know, I may manage to upload a photo or two to my Instagram Account @J5MM_Blog :)

See you when we get back ❤